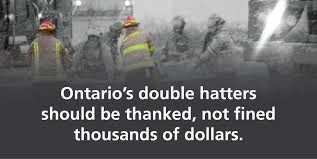 The Ontario government says it will propose amendments to the Fire Protection and Prevention Act, 1997 that would allow municipalities to employ full-time firefighters who volunteer (double-hat) in their communities.

In its 2018 Ontario Economic Outlook and Fiscal Review released today, Nov. 15, the government said it would be proposing amendments to the Fire Protection and Prevention Act, 1997 to “reform collective bargaining arbitration between municipalities and firefighting associations to make it more transparent, efficient and accountable.

These changes address long-standing concerns, including regarding the availability of firefighters and making the arbitration process more efficient.”

“This is definitely good news for Caledon and for all volunteer firefighters across Ontario,” said Mayor Allan Thompson. “I am very pleased the new provincial government have listened and are delivering on a promise they committed to. I await final details and remain optimistic for royal assent.”

The Town of Caledon has been supporting five local volunteer firefighters who have been involved in a battle since 2017 with the International Association of Fire Fighters (IAFF) after they were charged by their local full-time union in Brampton for violating an “oath” that prohibits two-hatting.

Earlier this year they lost a final appeal but have had full support from the town.

The ruling included a $500 monthly fine for the first six months if they did not give up their volunteer position and increased to $2,000 per month should the violation persist after 18 months.

“Volunteer firefighters are absolutely crucial to ensuring residents of Dufferin and Caledon have the confidence they deserve to be protected when they need help. In fact, the majority of fire stations throughout Ontario rely on volunteer firefighters,” said Dufferin-Caledon MPP Sylvia Jones. “The proposed changes, if passed, would prohibit associations representing firefighters from disciplining members for “double-hatting”. Many communities in Dufferin-Caledon have been hurt because volunteer firefighters have been forced to quit or face fines from their association. The Association of Municipalities of Ontario (AMO) and the Town of Caledon has been very vocal in calling for this change, and I am pleased to get it done so early in our government’s mandate.””